The Day They Sold No Glads 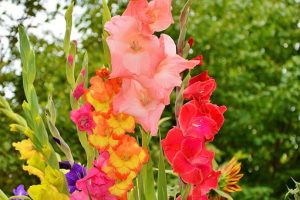 My in-laws had a fifty-acre farm with beautiful sandy loam soil in Flamborough, Ontario, on which they grew ten acres of flowers on a rotating basis, leasing the rest to a local farmer.  Early on summer mornings my father-in-law would take the truck, loaded with pails of gladioli that had been cut the previous day, to the wholesale market at the Ontario Food Terminal.  The money they made in that short summertime had to last them all year.

On this particular day, my young sister-in-law had accompanied her dad to the market.  Upon their return, she wandered to the back field where the rest of the family was hard at work.

“Guess how many pails of glads we sold today?”  she asked.
“Fifty pails?” they said, hopefully.
“We sold nothing,” she blithely replied, in the light-hearted way of child with not a care in the world.
“Nothing?” incredulously, “All day?”
“Nothing.”

Most of the glads were too far open to sell wholesale the next day.  There was nothing to do but to go through the bunches of flowers and try to save those few that still had unopened buds.  Disconsolately, they went back to the barn to begin the job of sorting.

At the very moment, a woman drove up the long farm driveway.  She pulled up to the barn, and inquired, with some desperation, whether she could buy some flowers, as the gladioli she had earlier bought for a wedding had not bloomed in time.  She took all the opened flowers at full retail price – more than they would have received on the wholesale market.  Happy and relieved, she sped off.

More than thirty years later, my mother-in-law still shook her head as she recounted the story, marveling how God provided that day for both their family and for the woman who just wanted to make a wedding day beautiful.

If we take a minute and look back on days we've lived we can be surprised at how God is there for us! A good story Trudy!

What a great story told about our grandparents flower farm!!! God is good and always provides!!!!❤️❤️❤️