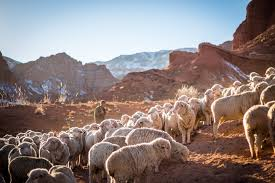 It’s been a season of saying good-bye to beloved people in our church, including a charter member of our community.  We are thankful for those God has given to faithfully mentor and guide us through tough times and places.  While there were great rewards, sometimes the burdens of leadership could be heavy.  Leading the church could be much like navigating the wilderness with the ancient people of Israel, as Moses did.

And Moses’ story has always offered great inspiration to those in leadership, as he is one of the most intriguing Old Testament figures.  Surviving Pharoah’s edict of infanticide to be adopted into the royal household, he received an education and training in Egypt’s systems. In a fit of anger, he murdered a cruel Egyptian taskmaster, then fled into the desert to escape retribution.  Reacting in anger was to prove problematic for Moses throughout his life.

It must have seemed, then, that tending sheep in the wilderness was to be his destiny.  But God had different uses in mind for Moses’ shepherding skills and one day the curiosity that sent him to investigate an ever-burning bush changed everything.  Still, Moses stuttered and balked and attempted to evade God’s commission to confront Pharoah, until God finally assured him of brother Aaron’s help.  Moses was given the courage to confront Egypt’s ruler through ten plagues, instructed the Israelites in a Passover that spared their firstborn sons.  He followed God’s command when he raised his staff to lead Israel through the Red Sea to safety.

Even as the elders cowered in fear on the plain, Moses climbed the fiery heights of Sinai to meet God.  He recorded the Ten Commandments along with the meticulous instructions for the priestly offices and the tabernacle in which the nation was to worship.  The first five books of the Bible were inscribed by Moses.  God would speak to Moses inside the tent, as a friend speaks to a friend.

There were times when Moses’ confidence was low.   He begged his brother-in-law, who knew the best places to camp in the wilderness, to accompany them.  He initially had trouble delegating authority. He dashed the stone tablets of the law to fragments, outraged to see how quickly Israel had fallen into worship of the golden calf.  He sustained a number of challenges to his leadership. Exasperated at the constant grumbling of the Israelites, Moses lost his temper and disregarded God’s instructions.  It cost him the opportunity to enter the Promised Land.

But Moses interceded for those same people when their idolatry provoked God to consider wiping the nation out. He defended his wife against his siblings’ criticism, then pleaded for his sister’s healing.   Most humbly he walked with God so that God’s presence lit up his countenance, but he had the audacity to ask God to show His glory.

Moses is named as one of the heroes of faith in Hebrews 11.  In spite of his faults (and at the end of his life, Moses couldn’t resist reminding Israel he’d sinned because of them), Moses could climb the mountaintop for a glimpse of the Promised Land, a look into the future.  Even fallible leaders can look forward in hope to God’s glorious home for his church.   Each generation of leaders passes on the shepherd’s staff, trusting that God will continue to provide his people with all they need to safely arrive at their destination.